A streak is defined as something happening twice in a row.

The only “streak” I’ve had in this game throughout the season has been been one in a row.

Sadly, it was week one…

Check out my picks at the DBC here

I bet there are not 10,000 people currently playing this game so I can’t even overtake $0 with the crap I’ve been dialing up.

Jason Day was just fine in Group 1 with T-15 but when the winner and T-8 come from the same group, sympathy isn’t warranted. Pick better golfers.

It never hurts to get it completely wrong so I’ll add that as well as in Group 2 I suggested I was struggling between Scott and Fowler. You don’t have to be Poirot to figure out who I ended up selecting. I went on in the paragraph to defend why Scott was the better, safer pick. I went boom/bust. I busted out. Again.

No chance was had in Group 3 as Snedeker didn’t show up and Grillo didn’t crack the top 30. Now that’s a proper WASH OUT. No false hope. No regrets. No nothing!

Sean O’Hair couldn’t finish the week after beginning Sunday T-25 but it wasn’t like I was looking at Gomez anyhow. Making the cut in Group 4 should count for something. It still wouldn’t help! 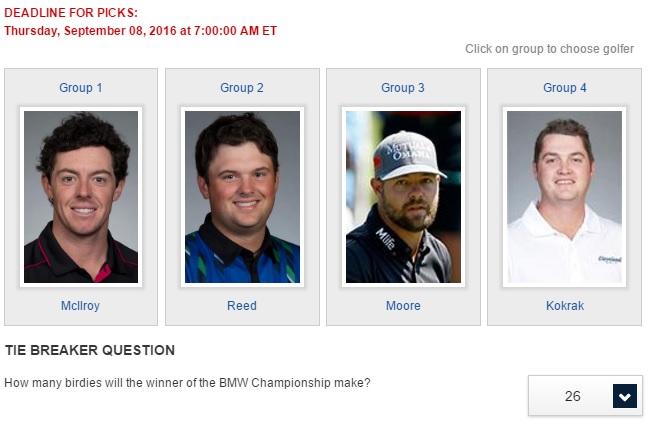 Group 1: Yeppers, I’m going the sheep route. Adam Scott is the play here for safety-first players if not Dustin Johnson. McIlroy is the defending champ and has no problem rattling off multiple victories in quick succession. What could possibly go wrong!??!

Group 2: Not much separates the rest of these fellas behind Reed but his short game is the best of the bunch. I’ve commented on ALL 70 PLAYERS in my preview column so go there if you need MOAR hairs split.

Group 3: I’ve quit over-thinking this. Most of you have suggested I don’t think much at all. My results in this game are my sorry retort…#sadface. Anyhow, Knox, Grillo and Woodland make capable replacements if you’re not into course form or current form. Or who I usually go with.

Group 4: Everyone makes the cut so we’ll have AWESOME Group 4 picks this week. I’m sticking my faith in a guy with back-to-back top 10’s who hits it a mile and paints GIR. Sneaky long shot is Ryan Palmer but he never listens to me when I’m on him…

Don’t be afraid to reach out on Twitter (@MikeGlasscott) or email me (mikeglasscott@gmail.com) for any angles, questions or general buffoonery you might have.