Well, well, well, look who showed up to become the first player to win the DBC twice and firmly throw his hat into this year’s FEC Playoff ring. 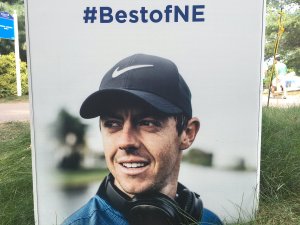 He’s found a new putting coach and a mallet that obeys most commands.

Gamers who have saved him for the final days of the season look to be sitting pretty!

My premise last week was gamers rejoicing that Patrick Reed finally found the winner’s circle since winning last in January 2015.

My premise THIS week is gamers rejoicing that Rory McIlroy finally found the winner’s circle after not winning since May of 2015.

The more things change the more they stay the same!

Paul Casey supporters can’t be tremendously surprised as he’s only won once (2009 SHO) in his Tour career. It doesn’t take the sting out that he finished second but there’s hardly any shame in losing to a runaway McIlroy train. This wasn’t Danny Lee or James Hahn in a playoff like last season. THAT hurts.

The next massive test for McIlroy is doing it again with the putter. The best news for him he gets ANOTHER course where he’s previously won to test out this theory. I don’t know how he couldn’t be positive returning to a place where he posted 20-under the last time he visited. To make it even better, they’ve lengthened the place out and as we’ve seen in the past (Kiawah, Congressional) that length, wet or dry, isn’t going to bother this cat.

Now, to the course.

I have no love for TPC Boston, sorry. Maybe because it’s Labor Day weekend and I don’t feel like working. Maybe because it’s a bit gimmicky with hazards in the middle of the fairway like No. 18. There’s nothing memorable about the course except the chance of someone making a tying eagle on the final hole. It’s the quintessential Tour course. Just enough birdies to feel exciting but just enough bogeys and doubles to thin the herd. If the final four courses are a representation of the Tour year in total, it easily earns its place.

On to Crooked Stick this week that was absolutely turned over in 2012 to the tune of 20-under. My preview will show the changes made to try and calm that number down but, as with most courses on Tour, Mother Nature will have the final say. Look for more information throughout all of my columns this weeks and as always, thanks for reading.

Limping in to the Playoffs

There’s a reason for this in my opinion. The fields are deep as you’d like and the Barclays is usually played on a traditional layout that rewards the better player. I’m not saying it CAN’T happen but…

Those who advanced are in BOLD

None of these players remain.

Canadian David Hearn, No. 92, was the highest player to advance from DBC to BMW.

Woof. Course horses. Hot players. All have bombed out recently.

Brian Harman played in the last group on Sunday at shot 77 to finish T-nobody cares. Instead of booking his weekend in Atlanta in two weeks he’s barely in the field this week and will need first or second to advance.

Tony Finau also didn’t take advantage of three very good rounds as his 73 on Monday dropped him to T-24.

Jim Furyk couldn’t catch enough heat in the first two events that gamers won’t have to worry about saving him for Atlanta. He’s out.

Chad Campbell and Steve Stricker both hit the top 25 but it wasn’t enough to advance.

Remember, it’s WIN and YOU’RE IN this week at Crooked Stick.

ANYBODY who takes home the trophy will automatically qualify for East Lake.

ANYBODY inside the top 50 who wins will have a chance next week to win the $10 million bonus if they go back-to-back.

There are a handful of players who have opened the playoffs in flying fashion: