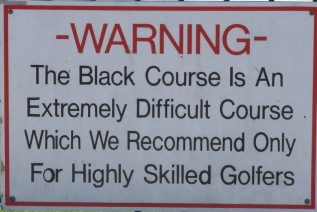 The Confidence Factor was the weekly column I wrote for PGATOUR.COM. It has evolved into Horses for Courses. I’ve included the link here for you.

Major championship golf should be difficult and this week shouldn’t be any different as the Black Course loads up for a third time hosting a major.

This time will be different because the USGA is NOT in charge this week; the PGA is. As I’ve pointed out, Kerry Haigh wants the professionals, not the golf course to be the star of the show so I’m not expect as penal of conditions as the U.S. Open would produce.

Also, as Jim Nantz pointed out at Media Day, the PGA Championship enjoys their players making birdies. No wonder why Rory McIlroy said that Haigh is the best at course set up!

The Black Course has small targets off the tee and into the greens. It also provides big trouble if ball-striking is loose or casual with thick rough and massive bunker complexes.

Interestingly enough the greens are NOT roller coasters or buried elephants but rather gently sloped. This should give the average putter a shot this week.

The wet rough will dry out as the week continues as Mother Nature looks like she will finally turn off the faucet. Recovery shots will determine who contends and who does not. Compounding errors is not the sign of a major champion; patience and acceptance usually is.

The entire bag will be in play this week but my tiebreaker is going to be ball-striking. Those who find more fairways should find more GIR and that equals, on non-violent greens, the best chances to make pars and birdies. Notice the order!

The crowds should be raucous and the temperatures in the 60’s will keep the ball from flying all over the place. Find a big boy bomber (who isn’t these days!) that won’t mind battling the best (Woods), the hottest (Koepka, Molinari) and the deepest field in golf!

Brooks Koepka: Time to split some hairs. Repeating is impossible but he’s already done that on Long Island at Shinnecock at the U.S. Open last year. Whatever was “wrong” with him saw him damn-near win the Masters so that’s gone. He’s playing second fiddle to Woods even as the defending champion and that should piss him off even more.

Dustin Johnson: The layoff with the younger guys doesn’t bother me as much because they just don’t care. In a good way. A bad week for the OWGR No. 1 is a top eight and I’d be shocked with anything different this week.

Tiger Woods: Can he be 20-something again? We’ll find out this week as he looks to secure the first two legs of the 2019 Grand Slam and tie Jack Nicklaus and Walter Hagen for the most PGA Championships. He hasn’t played since Augusta because he wasn’t ready. If he’s ready, he’ll be on the podium.

Justin Rose: Like Johnson, it’s hard to understand why he’s only won just one major because he’s immensely talented. His U.S. Open title was at a soggy Merion and he arrives with a solo third at a difficult Quail Hollow his last time out. He should repay the faithful that he eviscerated with MC at the Masters.

Francesco Molinari: Just stop it already. Win at Carnoustie followed by T6 at Bellerive and he led by three on the back nine at Augusta. Just stop. Click play.

Rory McIlroy: Reading above reminds us how he used to dominate this event on big, bad courses. With the career grand slam pressure not in focus this week I’d expect a big push. His ball-striking should give him a massive advantage but it’s the putter that gives me the slightest of doubts.

Jon Rahm: He’ll want to fight the entire gallery and they might just fall in love with him. Fearless, powerful and a quick study, he should be in the OBJECTS LOOK CLOSER THAN THEY APPEAR mirror on Sunday afternoon.

Rickie Fowler: More artist than machine, Fowler will continue to bear the burden until he breaks through. The last time this track was used he couldn’t close out his 54-hole lead but I’ve typed that more than once. I’ve also typed out that his complete bag is always of interest in the hardest tests in golf.

Tommy Fleetwood: The host last week at the British Masters will exhale deeply this week as he can just worry about playing golf. He’s played the weekend in his last eight majors and he should be encouraged that putting won’t be the difference this week.

Matt Kuchar: He’ll test the theory about short and in the fairway this week! He’s second in GIR and eighth in fairways but will need some extra lumber to get home. His excellent short game can help grind out pars as well. Playing as well as ever but I can see why his lack of length would bother you.

Paul Casey: Good news is six top 10s. Bad news is MC at Masters and THE PLAYERS. Good news is he defended at Valspar and was T4 at Quail Hollow. Better news is he’s top 25 in both fairways and greens.

Hideki Matsuyama: T16 is his best finish in his last five majors but if ball-striking is the prerequisite, which I believe it is this week, he moves up.

Patrick Cantlay: Grew up on Poa in SoCal and is rock-solid tee-to-green. Remember when he led the Masters on Sunday?

Gary Woodland: Absolutely no form but this should set up perfectly for him. The 36-hole leader at Bellerive last year also had a taste of Tiger on Sunday before cashing T6.

Jason Day: He hits it a mile and gets the ball in the hole. That travels at every major. Let’s hope his back stays in place!

Jordan Spieth: The pressure of the career grand slam probably doesn’t match answering the “what’s wrong with your game” questions every week. He doesn’t believe he’s in a slump. I don’t believe he’s going to contend but he’s moving in the right direction. I think.

Adam Scott: Have you noticed the theme about ball-striking vs. putting this week? I don’t care if he has six putters in the bag. Use one every three holes!

Sergio Garcia: He gets the nod because he’s always played well here. I’m not building from him but he’s bricks in the wall. With four top-10 paychecks in his last seven, omitting him is reckless. And feckless. Having no feck.

Rafa Cabrera Bello: I never can find the determining factor with him. He’s steady, almost boring, and sometimes that’s perfect in fantasy golf.

Ian Poulter: Grinding away, the Englishman is having a fantastic 2019 and sits in the top 25 in both fairways and greens.

Webb Simpson: He’ll keep in play off the tee (18th) and can make enough pars from missed GIR. On fire in the last five majors.

Louis Oosthuizen: Too much pedigree and too many good results on premium tracks.

Phil Mickelson: No form to speak of as he didn’t fire at Augusta or Quail Hollow Club. Can the New York crowd light that fire? I’m not sure this is the venue for him and he should probably be left alone.

Jhonattan Vegas: Long and strong, of his eight weekends this year, seven have gone for T30 or better.

Henrik Stenson: Because I’m a sucker for fairways.

Ryan Moore: Ok, another fairway splitter caught my eye as he has a pair of top-10s and a T24 in three previous starts. Can’t fake it over three events for my money.

Jason Kokrak: It’s been every week so I’m running out of things to say. Did he run out of gas with 74-78 on the weekend at Quail Hollow Club?

Lucas Glover: One of only four winners here Glover has T31 or better in every weekend this season. His 2009 U.S. Open title included the course record of 64.

Sung Kang: Course-record holder and winner his last time out. Only McIlroy and Woods have won the week before the PGA Championship in recent memory.

Joost Luiten: Form in Europe has been rock solid and he’s been around the block a few times. Good combo.

Kyle Stanley: Trending in the proper direction with T21 at Augusta and T8 at Quail Hollow Club.

Joel Dahmen: Busted out with T12 at THE PLAYERS and has four top-30s since. Second to Max Homa in Charlotte last time out. West coaster on Poa doesn’t hurt either

Keegan Bradley: Snuck on the course a million times while at St. John’s, Bradley is one of the very few who won this event in their first try. Crowd will be carrying him.

Keith Mitchell: I’m not sure these are his preferred greens but if he’s dialed in off the tee, he’ll have a large advantage. Top 30 off the tee and into the greens. Now, about that putter…

Jim Furyk: Can you contend by keeping the ball in the fairway? I’ll let Furyk grind all the gears and be the tortoise.

Lucas Bjerregaard: Hell if beating Tiger in Match Play and cashing T21 in his first Masters didn’t convince you, nothing will.

Justin Harding: T10 and T12 plus MC and MC = SHIT WHY NOT. Only downside is both big finishes are courses with no rough (ANGC and Trinity Forest).

Si Woo Kim: I hate when he’s in the field.

Erik Van Rooyen: His last six have produced four in the top 15 and three in the top six.

David Lipsky: T5 and fifth in his last two in Europe.

Pat Perez: Should be safely hidden down here after T12 and T8 in his last two. Was in the mix at Quail Hollow before final round 74.

Matt Wallace: He’s shown me enough on this side of the pond and almost won last week at the British Masters.

Eddie Pepperell: T2 last week was his seventh payday in a row.

Branden Grace: Gave it a run at Tillinghast’s Baltusrol in 2016 (T4) and has shown big major activity in the last four years. His current form suggests making the cut and a stall out.

Ryan Armour: Old guy who can’t hit it out of his shadow but right down the pipe. T12 at Honda and T6 at Innisbrook grabs me.

Daniel Berger: It hasn’t happened over the last two years but the best one was T6 at Shinnecock last summer.

Charles Howell III: No top 25 in his last six and last three are MC, MC and WD last week in Dallas.

Byeong-Hun An: WD with a neck injury at WFC.

Patrick Reed: Nope, not me. I’m burned out.

Marc Leishman: WD last week with a bulging disk in his back. That heels in a week???

Bryson DeChambeau: My compass and protractor is broken. I’ll be interested to see how patient he is or isn’t. But I’m not going to have a dog in the fight.

Cameron Smith: Icicles since T6 in Mexico and his fairways and greens numbers ain’t good.

If you have any questions, don’t hesitate to reach out on Twitter (@MikeGlasscott) or email me mikeglasscott@gmail.com.