Pictures > words and all that

Now that I’ve set myself up for disaster, I’ll take all of you with me!

Gamers will now see the “value” of starts in this game.

I blew my final start of the session on Spieth last week and have to live with my decision!

The decisions I have made leading up to this point have seen me hit my highest highs in this game as I now reside at No. 21.

It has been a steady climb over the last few weeks and now, like OAD, I can sit back and let the others plug him in. I have the points in my bag; they have hope in their starts remaining.

The South Florida “home game” will have plenty of residents teeing it up but this event is far from a picnic. Gamers will see less than 7,200 yards on the card and think “short, resort course”.

The winning score here has been SINGLE DIGITS for the last four years. Heck, there were only 13 players who broke par for the week last year!

My theory is quite simple: Difficult golf courses require premium players. Of course you may sprinkle in a guy who’s off-the radar but I’m not in the top 25 because I’ve played a bunch of fliers!

If you don’t see one of your favorites or need more information, just click here for my preview. 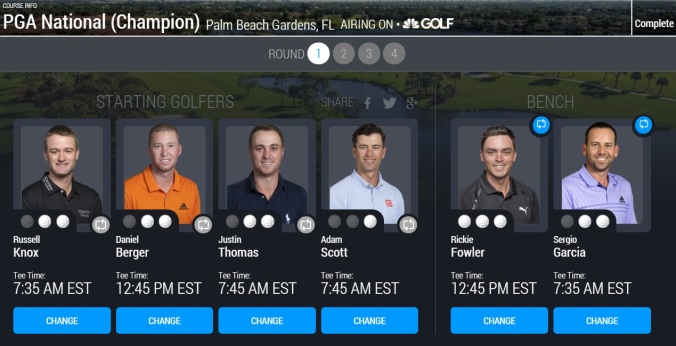 If you would like more information or any questions answered, email me mikeglasscott@gmail.com or hit me up @MikeGlasscott.