Plenty of options and angles this week at TPC Four Seasons outside Dallas.

Now, @JordanSpieth will be featured on the cover of a @wheaties box. pic.twitter.com/kn2YUuI2i1

Home game. Wheaties box. Too many distractions again this year?

DraftKings has plenty of ways to join the action weekly in a salary-cap-format game. Gamers pick six players on a budget of $50,000 and hope they make the cut and go low. Each week I’ll list the players who I think have the most value and give examples of potential lineups.

Select six players who fit into the $50,000 salary cap maximum at DraftKings.com. Player values are established by DraftKings.

Speaking of useless, these were the selections last week at the last minute on Wednesday night. Hey, I have a life, so get over it!

Remember, you can always get a 100% refund for my insight if you send me an email with a self-addressed stamp envelop included with your complaint.

Well, that was interesting.

Rickie Fowler: He closed with 79 after beginning the final round even par. If he shot 70, he would have finished inside the top 12. Add this finish to his limping home with Spieth at Augusta from the penultimate group and I’m not thrilled.

Justin Thomas: Hey, look! Another 79! At least this one was on Saturday so any hope was long gone. Rubbish.

Paul Casey: I was pleased with his bounce-back round on Sunday (71) after double hockey sticks on Saturday. T-21 after his 77 seemed like a victory.

Francesco Molinari: I still can’t figure out why a guy who hit the top 10 the two years prior went off at this price. He made it three top 10’s in a row and was four-under-par on the weekend. Bravo.

Martin Kaymer: He went off at the same price as Molinari yet won here just three years ago. His 2017 has been awfully solid but somebody knew something as his 75-78 weekend saw him limp home T-DFL of those who made the 54-hole cut.

One ping. One ping only.

For more details, check out my preview at mikeglasscott.com

This week is always interesting to see how the players bounce back from THE PLAYERS. Needless to say, this TPC is a non-Pete Dye design and that probably won’t bother most of the field.

It’s the last year at TPC Four Seasons and this event has produced its fair share of big boys, newbies and everything in between.

The list of winners suggests the guys who find the most GIR should have the best chances. I’d also take a peek at guys who score on the par fours as the par-70 setup only has two par fives.

Sergio Garcia didn’t hit many fairways last year but he found plenty of GIR and holed over 400′ of putts. That’s a clue!

My lineup this week: 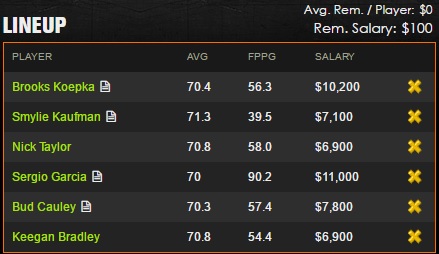 Be sure to check my preview to see who does or does not fit this week.

One ping. One ping only.